I’d really like to be able to use treemaps in NYTProf reports to visualize the time spent in different parts, and depths, of the package namespace hierarchy. Currently that information is reported in a series of tables.

A much better interface could be provided by treemaps. Ideally allowing the user to drill-down into deeper levels of the package namespace hierarchy. (It needn’t be this flashy, just 2D would be fine :-)

In case you’re not familiar with them, treemaps are a great way to visualise hierarchical data. Here’s an example treemap of the disk space used by the files in a directory tree (from schoschie) 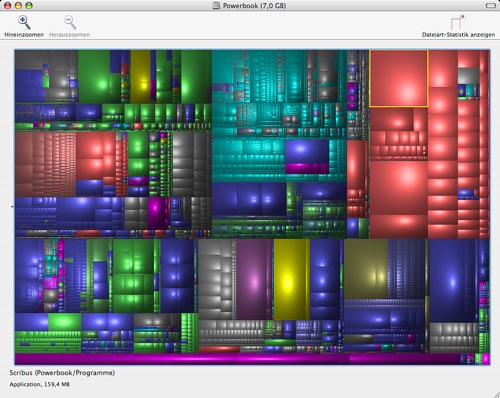 Perl already has a Treemap module, which can generate treemap images via the Imager module. Treemap is designed to support more output formats by sub-classing.

I guess it wouldn’t be hard to write a sub-class to generate HTML client-side image map data along with the image, so clicks on the image could be used to drill-down into treemaps that have more detail of the specific area that was clicked on.

More interesting, and more flexible, would be a sub-class to generate the treemap as a Scalable Vector Graphics diagram using the SVG module (and others).

I’m not going to be able to work on either of those ideas anytime soon.

29 thoughts on “Generate Treemaps for HTML from Perl, please.”